A week before EB-Expo… we were told that there is a booth available at the Indie Section of EB-Expo up for grabs if we want it. That left us with a choice.

I was leaning very closely to just not going, and miss this opportunity… mainly due to fear and un-confidence. I look back now that this situation is perhaps one of the most common traps for ALL indie artists, missing out opportunities due to fear! Fortunately i came back from an entrepreneur seminar just a few weeks ago, with something i learnt that helped me follow through:

“Create Accountability for Yourself”

Its exactly like back in college or Uni. When an assessment deadline is due… you become super human efficient in order to get it done. Its amazingly powerful! What you’d think you would be unable to achieve…. once you hold yourself accountable… you push yourself beyond limits.

WIth that… i accepted the offer… and i spent the entire week grinding on material needed to setup a cool booth in time for EB-Expo. And it turned out quite well!

We had a cool banner setup, had 5 tablets setup by scabbing from friends and family. More busines cards, more signs and displays and new posters and cool character cutouts etc. It was something thats “displayable” to EB-Expo standards at least. 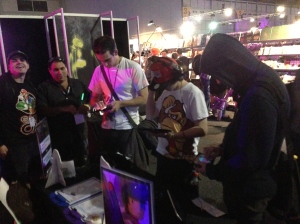 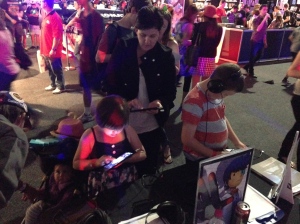 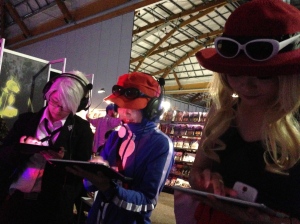 It was really cool to see various audiences play the game, ranging from males, females, kids, dads, mums, cosplayers etc! It was very validating to see them engaged and interested in playing Cell Surgeon and the 6 levels that was available! Gotten really valuable feedback that influenced alot of design choices that ill need to apply in the future.

I even implemented changes on the fly with bug fixing and gameplay tweaking while exhibiting! By the end of the expo…. Cell Surgeon was so tweaked….. that majority of players were able to play and be engaged throughout all six levels… without putting the device down.

Had some press exposure from online journalists, game news / reviewers and youtube journalists, as well as some celebrity endorsements with the lovely Claire Costigan from SavePoint TV 😛

Fortunately Ryan (our artist) was also able to come help out, along with many friends that we both snuck in, to share the task load of exhibiting the game, giving everyone a chance to explore the actual EB expo looking at other peoples games.

Unfortunately, Pierre (our composer) could not make it , due to being away on holidays overseas. Us 3 have never actually sat down all together before, and would have been nice to have had a group photo of the full 3 members of the team!

This exciting chapter of InJoyLab’s journey would not have happened had we decided to not attend due to fear of failure, and un-confidence in our “effectiveness” as an exhibitor (which almost happened! >.<)

However, because we “grew some balls”, we walked away with much more exposure for ourselves, many people signed up with their emails, loads of valuable feedback and validation from literally all kinds of audiences, expo experience points, met alot of new friendly devs and overall a memorable experience.

And this blog’s purpose is to hopefully inspire others to say “YES” to when opportunity comes your way, whereas it is so tempting / comfortable / safer to have just say “NO”.