I (Carlton) got invited (out of no where) to be interviewed for a live 30min show for a kids show on ABC!

The biggest question was ….. How? And i asked the producer Mark Oxbrow, who invited me.

Apparently, our appearance back at EB-Expo 2013, and our media exposure back then there led to one of ABC’s producers to be able find us while scouring the internetz!
I was invited because :

“You’re a game developer, we saw your video interview during EB-Expo, and saw that you can talk quite confidently in front a camera…. which is great!” said Mark.
Cool, i replied!

So I got in early 10am, in which they sat me down for makeup! Where i sit on a chair with alot of lightbulbs on the mirror…..just like in the movies!

And from there on it was just rehearsals and setup until 2pm before the LIVE show kicked off. 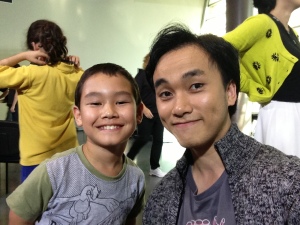 Rebecca Fernandez our head of IGDA Sydney was there, although she was stationed at the level above us.

And got to meet Julian, the 12 year old game developer prodigy! I saw him on TV last year, couldnt believe i get meet him!

And coolest thing was all was getting to get interviewed by Bajo and Hex, who i pretty much watch quite often on TV (along with most gamers). It was quite an honour!
The show was executed with like 4-5 camera crew, lighting, sound, directors, producers, managers, wranglers and a really large and professional team! The room was quite packed! There was at least 15-20 people off camera making sure everything went smoothly because it was LIVE!

But otherwise, it was a really fun and great experience, got to meet really great people, and feeling really privileged to have been asked to be apart of this!

LESSON: Its just goes to show the decisions /actions / performance that we make in the past will make an impact to our future.