All GGJ2014 sydney games were showcased at the PowerHouse Museum the week after it was completed. It was opened up to the public for play-testing and feedback, but more so that they can just recognise what we do and achieved, and that we got some potential public / media attention. 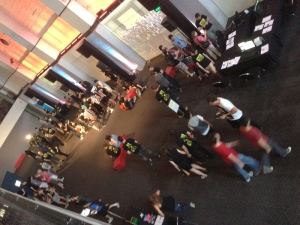 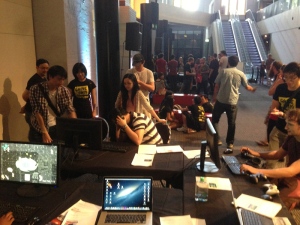 During this one week downtime, we had the chance to fix up alot of bugs, plus giving a good polish phase to the game in terms of sound design, aesthetics in UI/UX and misc gameplay improvements.

We setup “Stranded” on the day for the public to test out, and overall the feedback was very positive! Everyone really liked (the new and improved version of) the game!…. as it felt more complete and tweaked for better gameplay experience.

At the end of the day, we all gathered at the main hall, for the awards Ceremony for this years best GGJ games and achievements. Unfortunately we did not win anything, despite having extremely positive feedback on the day, our submission that we submitted the week before (at the end of the actual jam) was definitely buggy and not polished, and lacked sound… and definitely not award worthy…

Still… being my second time at Game Jam, my experience from my first GGJ back in 2012 has greatly helped me improve on how GGJ2014 turned out… and how to better work amongst the team. I didnt really join GGJ to compete, but rather to pit my Unity skills that i have acquired since starting 1.5 years ago….. to see how i fair at making games. And Im really happy with how we finalised Stranded, in its final polished and the most perfect form it can be.